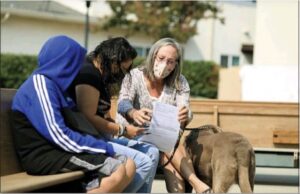 Carol Lillig and the church ladies at St. Vincent de Paul in Morgan Hill have been helping struggling renters for a couple of decades — long before the pandemic throttled the work lives of landscapers, school bus drivers and child care workers.

On a recent weekday,  Lillig sat outside the church on a folding chair across from Xiomara Galicia, a single mom, who lost her retail job at the beginning of the pandemic. Galicia, 36, has four school-aged children, $123 in unpaid rent and an unemployment benefit about to end. She worried even a small blemish on her rent record would ruin future chances for housing. She needed help.

“To be behind is stressful, as you know” Lillig told her, and took photos of Galicia’s financial documents and uploaded them into an online relief application. Lillig told Galicia she should qualify to have her back rent covered and future rent paid for the next three months, under the complex formulas used by local and state agencies to reimburse landlords.

About $500 million in federal funds is earmarked for the Bay Area, but how quickly it will be sent out and how many families it will help before the eviction ban ends this month remain looming questions.

Bay Area social agencies are leaning hard on smaller nonprofits and recruiting other institutions. Santa Clara County courts have begun promoting the local relief efforts, trying to bridge the trust gap between landlords and tenants. One of the East Bay’s largest community organizations expects to double the number of social agencies it’s using for outreach. The state also has more than tripled its number of caseworkers.

Yet frustration continues to mount. The California relief program, supplemented by an additional $2 billion in aid for unpaid utility bills, has been marred by glitchy application websites, confusing requirements for local and state programs, and some skepticism among landlords and tenants.

“Progress has been glacial,” said Santa Clara County eviction attorney Todd Rothbard. He has reached out to housing officials to facilitate aid payments to his landlord clients — hoping to get batches of applications done uniformly and efficiently — but efforts have stalled, he said.

“The myth is that landlords are frothing at the bit to evict,” Rothbard said. “In most cases, all they want to do is get paid.”

The U.S. Supreme Court’s rejection of the Centers for Disease Control and Prevention eviction moratorium last month has spurred federal officials to find ways to lower barriers to getting relief to tenants and landlords. The CDC ban had little effect in California, where tenant protections are more comprehensive. The state’s eviction moratorium expires Sept. 30, although renters can receive limited protections by applying for state assistance through March 2022.

California housing officials have received requests for $1.4 billion in relief and paid out $426 million — roughly 30% — since the program launched in March through Aug. 31, according to state data.

Large cities and counties were allowed to establish individual programs, and have primarily focused on the poorest renters most likely to become homeless. Oakland suspended its local program in May after being flooded with applications for its $13 million share. The city expects to reopen the program when new funds become available.

Jonathan Russell of Bay Area Community Services in Oakland said the agency has been able to prioritize families at high risk for homelessness through their case files, data and relationships with small, community nonprofits. It has doubled its network of local agencies in Oakland.

Partnering with neighborhood groups, he said, “has been a critical step in the process.”

Santa Clara County and San Jose have teamed up to distribute aid to residents making less than 30% of the community’s median income, or $49,700 for a family of four.

Chad Bojorquez of Destination: Home said the agency expects applications to surge this month. The organization, which is serving as a contractor helping administer the joint fund created by the county and city, originally hired temp workers to handle the casework. But housing officials learned the complicated program needed well-trained, experienced social workers.

Destination: Home has boosted its network of housing partners from 15 before the pandemic to a high of 70 local agencies, he said. The Santa Clara County program has received $50 million in requests from 4,700 households through August, and has paid out  $11.7 million, according to local data.

But some have found running aid programs too cumbersome. At least nine cities and counties, including Solano County, have folded local programs and turned administration over to the state. In Southern California, Los Angeles and Orange County have also switched to state administration after trying to manage distribution.

A spokesman for the state Business, Consumer Services and Housing Agency said more cities have approached the department about turning over relief efforts.

In Morgan Hill, Lillig and a half-dozen women of the St. Vincent de Paul parish were tapped by housing officials a few months ago. They’ve helped about 140 families so far, meeting clients and landlords outside the church or in apartment complexes.

Church volunteers and a paid employee spend between three to five hours on each relief application — faster than when they first started, but still a labor-intensive job to gather pay stubs, leases, tax returns and verifications from landlords, among other details. Many needy clients work for the school district, or as landscapers, construction workers and cleaners.

The church volunteers have agreed to handle cases from another 60 families, and will start to receive small stipends for their work.

Several times, Lillig said, an applicant has cried when the application is filed, well before any public money is sent to the landlord. “They’re happy, but they’re relieved,” she said. “They’re relieved.”