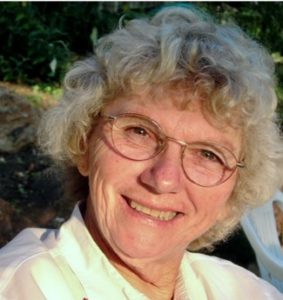 It is with heavy heart that we announce the passing of our own Barbara Wilkinson to eternal rest.

On the morning of Tuesday, July 21, 2020, Barbara passed away suddenly at Kaiser Hospital due to heart complications.

Barbara was born in Santa Rosa on May 16th, 1935 by devout Catholic parents, Lawrence and Rose Zuur. She
was educated by the Ursuline Nuns from Kindergarten until High School graduation in 1953. Barbara then
attended San Jose State and after receiving her teaching credential taught Elementary School at Soquel
Elementary in Santa Cruz. While living with some of her sorority sisters in Capitola, she met a handsome surfer,
Gordon Wilkinson. They married at the Carmel Mission in June of 1958. Barbara, full of energy, became the
Director of a Preschool in Marin County while also raising 4 children. The family moved eventually from
Marin County to Burlingame. After her children were grown, Barbara became interested in ministry work and
studied Theology at Rhema Bible Training College in Tulsa. After graduation, she applied to work for Our
Lady of Peace Shrine to begin her dream of working at that Catholic Church. She was hired by Pastor Msgr.
Sweeney as the Facilities Manager, not her dream job. However, it grew and over the next 30 years and she
handled several different church positions. Her favorite position was as the Wedding Coordinator. Barbara
retired in May of 2015 after her 80th birthday but continued to do charity work with the St. Vincent de
Paul Society Our Lady of Peace Chapter, which she helped found, as a Board Member until she passed unexpectedly on July 21st, 2020 at 85 years old. She will be greatly missed.

Donations to St. Vincent de Paul in Barbara’s name are most appreciated as she was still very active in assisting the needy people in Santa Clara County.