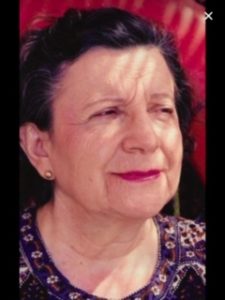 We are deeply saddened by the loss of our longtime Vincentian Lina Taskovich, who volunteered at the SVdP pantry of St. Athanasius Church in Mountain View, where she was a longtime parishioner.

Lina Taskovich, a longtime resident of Palo Alto, died peacefully on the evening of Saturday, June 15th at the age of 93. A loving mother of three and a lifelong research scientist, Lina balanced raising a family with her research into the causes of cancer at the Stanford School of Medicine and later her research into the development of advanced drug delivery systems at Alza Corporation in Palo Alto.

Lina was born and raised in Riobamba, Ecuador, the third of eight children of Natale & Maria Luisa Tormen. She left Ecuador to earn a bachelor’s degree in Chemistry at Michigan Tech. University located in Houghton, MI in 1952. She later earned a master’s degree in Chemistry from the University of Minnesota, Twin Cities where she met her future husband, Hugo Taskovich. Hugo and Lina married in Calumet, MI in 1955.

Lina and Hugo moved to California in 1957 where Lina found employment as a research scientist at the Stanford School of Medicine. She left Stanford and joined Alza Corporation in 1971. She retired from Alza in 1995.

Lina was a passionate and skilled baker. She baked and decorated many wedding cakes for her close friends. In retirement, she focused on helping the poor of the Mid-peninsula by volunteering many hours at the St. Vincent de Paul food pantry at St. Athanasius Church in Mountain View where she was a longtime parishioner. In retirement, she also loved to travel, especially to Europe and to visit her relatives in Ecuador.

Lina is preceded by death by her ex-husband Hugo (2013) and her eldest son, Eugene (2018). Lina leaves behind her two other sons, Gregory and Peter of Palo Alto, CA.

Lina’s Mass of Christian Burial will be held on Wednesday, June 26th at 10:30 AM at Saint Athanasius Church in Mountain View, CA. Her Vigil and viewing will be held on Tuesday evening, June 25th from 4 PM to 8 PM (with a Rosary at 6 PM) at the Alta Mesa Cemetery Chapel in Palo Alto.

Donations in her name can be made to the St. Vincent DePaul Society of Mountain View c/o St. Athanasius Church, 160 N. Rengstorff Ave., Mountain View, CA, 94043.